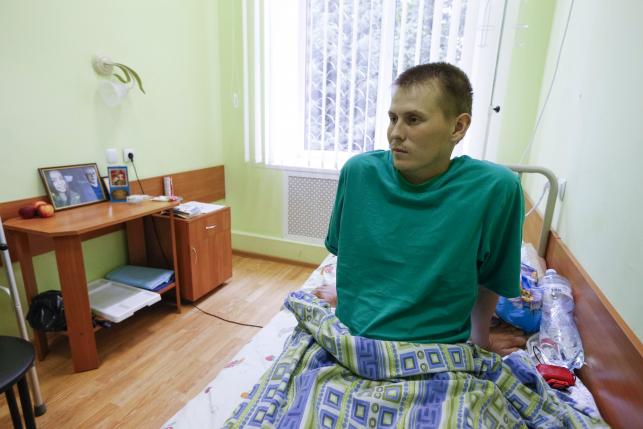 From his hospital bed in the Ukrainian capital, Russian fighter Alexander Alexandrov feels abandoned by his country, its leaders and even the local Russian consul.

Alexandrov, 28, says he's a Russian soldier who was captured in east Ukraine after being sent there on active duty with Russian special forces to help separatists fighting Kiev. He said he was serving on a three-year contract. "I never tore it up, I wrote no resignation request," he said. "I was carrying out my orders."

Yet Russian President Vladimir Putin, in the face of widespread evidence to the contrary, has repeatedly said there are no Russian soldiers in Ukraine – only volunteers who have gone to help the separatists of their own accord.

So Alexandrov and Yevgeny Yerofeyev, another Russian who was captured with him, find themselves pawns in the deepest confrontation between Moscow and the West since the Cold War.

They believe they should be treated as captured servicemen. But Moscow will not admit they are any such thing, or that it has sent any soldiers into Ukraine to help wrest swathes of east away from Kiev's control. To do so would undermine Moscow's claims that the separatist uprising there is a spontaneous reaction by Russian-speaking communities against Kiev.

The Kremlin has described the two men as Russian citizens, and Russia's defence ministry has said they are former soldiers who left the military before they were captured.

Disowned at home, the two men stand accused by Ukrainian authorities of being terrorists.

In an interview from his bed, Alexandrov, wearing a hospital-issue green T-shirt and with several days stubble on his face, told Reuters he felt alone and trapped between these vast forces. He said the Russian consul in Kiev had visited him and Yerofeyev, but had been a let-down. The two captives had hoped Moscow would get them home in a prisoner exchange, but they said the consul had been non-committal.

"I asked him a few questions. There was no answer to them. He said that when he has the answers, he will come again and let us know what they are,” said Alexandrov, whose leg was shattered in a gun battle.

The Russian embassy in Kiev had no comment on Friday. In an earlier statement it had described Alexandrov and Yerofeyev as “Russian citizens detained in the Luhansk region” and said they were receiving proper medical treatment. “Embassy officials plan to visit the compatriots regularly,” the statement said.

Ukrainian armed servicemen and officials in civilian clothes were present during the interviews Alexandrov and Yerofeyev gave to Reuters. Both Russian men made it clear they were active service members of the Russian military on the day they were captured. Alexandrov said he knew his military identification number off by heart: E131660.

He also said he fears for his relatives back in Russia. A few days ago, his wife, Yekaterina, appeared on Russian state television. Looking nervous, and talking in stilted phrases, she said her husband had quit the Russian military in December last year. That account was helpful to Putin's claims that only volunteer Russians have gone to Ukraine.

"They said I was no longer a serviceman," Alexandrov said. "It's a bit hurtful, especially when they do it through your family, through your wife. That crosses a line."

Alexandrov, who was captured on May 16, said he had been unable to get hold of his wife by telephone for nearly two weeks. She has not replied to his messages posted on social media accounts. A photograph of him with his wife stood on the table next to his bedside.

He said Yekaterina always used to pick up his calls, even before they were married, when sometimes he would call in the middle of the night. He asked to borrow a Reuters correspondent's mobile telephone so he could try calling her. Yerofeyev, also in a green T-shirt, his right arm in a bandage binding it to his torso, came into the room and watched.

Alexandrov dictated the number to the correspondent, and checked it was correct. With the phone in speaker mode, the call connected, and the ringing tone could be heard. But no one picked up.

"I'm really worried about my wife," he said. "Right now all this has fallen on her small, fragile shoulders."

Ukrainian prosecutors say the two men will be charged with acts of terrorism, alleging they killed Ukrainians in combat. The soldiers have denied that, saying they did not fire their weapons.

If they had the status of soldiers fighting a war, international law would give them some protection from those charges; but they do not have that status since Moscow has said they were not acting on its orders.

Asked about the two servicemen on Thursday, Kremlin spokesman Dmitry Peskov said he had nothing to add to previous comments, when he had said they were ordinary Russian citizens who were being held prisoner.

"Everything that concerns servicemen, you should address your questions to the defence ministry," said Peskov.

An official answering the telephone in the defence ministry press service on Thursday evening said no one was available to comment. There was no immediate response to written questions sent to the ministry. Previously, a defence ministry spokesman had told Russian state media that Alexandrov and Yerofeyev had served in the military in the past, but were no longer serving when they were captured.

The accounts given by the two Russians of how they came to be in Ukraine paint a different picture, shedding light on the realities of a shadowy war that has killed thousands of people.

They said they serve in a unit of the main intelligence directorate of the Russian general staff, based in the city of Togliatti on the Volga River. The directorate, known by its Russian initials G.R.U., is one of the military's elite forces, usually used for highly sensitive operations.

According to Alexandrov, their unit of 200 men was sent into Ukraine on March 26. Before crossing the border, he said, they were instructed to surrender their dog tags and military identification. They were also told to swap their uniforms for mismatched camouflage fatigues to blend in with the separatist irregulars.

Once inside Ukraine's separatist-held Luhansk region, his unit provided reconnaissance support to the separatists, he said. Separatist irregulars did most of the fighting, he said, and on occasion came close to shooting the Russian forces by mistake.

"I think that probably they need to drink less. Half of them are ex-convicts."

He said the May 16 firefight in which he and Yerofeyev were injured was the first time they had been involved in combat during their mission in Ukraine. Alexandrov described how he was hit in the leg, and tried to crawl to safety. When Ukrainian soldiers approached him, he thought they would kill him, but instead they picked him up, carried him to a vehicle and took him to hospital.

In past cases when Russian citizens have been captured or killed in Ukraine, officials in Moscow have said they were on leave from the military and fighting as volunteers - or in one case that a group of soldiers had got lost and entered Ukrainian territory by accident.

The case of Alexandrov and Yerofeyev is not so easy to brush aside. On Thursday Ukrainian President Petro Poroshenko said bluntly: "These are special forces soldiers who killed Ukrainians, who were sent here. They are part of the regular Russian Federation military."

One Ukrainian soldier was killed in the firefight in which the two Russians were captured, Ukrainian soldiers who witnessed the incident told Reuters. However, a Ukrainian army colonel, whose unit was involved, said that none of his men had seen Alexandrov or Yerofeyev shooting anyone.

The case against the two men is being handled by the Ukrainian Security Service (SBU). It had no immediate comment on the case.

The SBU previously posted a statement on its website saying the two Russians were suspected of involvement in terrorist activity, but did not mention any specific evidence that either of them had been directly involved in killing Ukrainians.

Now, both Alexandrov and Yerofeyev are torn. They say they yearn to get home to their families – but they worry about how they can live in a country which, in their view, has disowned them, even though they were prepared to give their lives for it.

"It's scary. There, no one is going to be saying thank you to me, I don't suppose," said Yerofeyev when asked about going back to Russia. "I think that my biggest adventures will start when I get home."